[Part 1 of this Learning To Play is HERE]

By this point I’d been reading articles and forum posts for more than a week. I'd also been staring blankly at conversations like this:


“I get Gordian Blade + Personal Touch, Battering Ram, and Crypsis up, and started running all over the place. I nabbed two early agendas for four points, then my friend's side of the table started looking like an ICE fortress. I ran into Heimdall many times, but I was too poor and could not boost Battering Ram enough in the first half of the game, so I skipped his subroutines with clicks and passed.”

The core set arrived. The base game containing 252 cards. Half for the Corp, half for the Runner, plus some neutral cards. I rifled through them, pushed them around on my desk for a bit. I assembled a Corp deck and a Runner deck to these specifications. I read and re-read the rule book. I watched videos of games on YouTube.

Gradually, a picture formed in my head of how the game might flow and, after a week I felt ready to shepherd Sula and I through a game.

-Note: Sula and I are what I would describe as ‘fervid’ players of the Game of Thrones LCG, a card game which has enough similarities to the rhythms of a Netrunner game that we felt confident we could fairly easily grasp the gameplay. 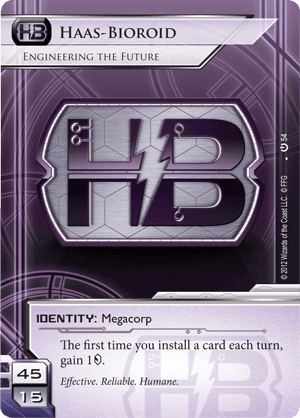 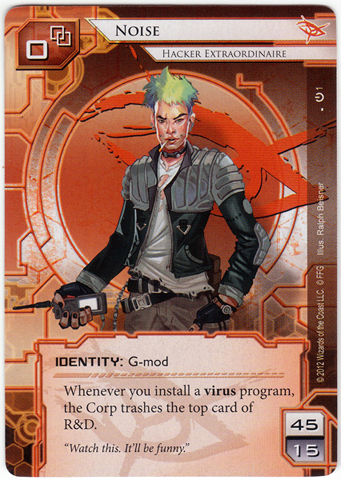 Netrunner comes with handy cards for each player which has printed on them the variety of actions they may execute on their turn: draw a card from R&D, play an operation, make a run, etc. Which meant playing the game felt very easy and clear. We both knew what actions we could take and gradually, as we passed turns back and forth, we became more confident of the tactical soundness of the actions we chose.

Game 1 was mostly a process of one of us doing something, then the two of us jointly checking our understanding of both the legality of the action and the consequences of it for the other player. Sula was very unhappy that I could look at her draw deck before she could, and if I found an Agenda in there I could steal it and score points.

Here’s an interesting thing about Netrunner: the Corporation player has in their hand the Agendas: the things that both players need to win the game. That’s weird isn’t it?  It’s like playing chess but only one of you has a King.

The Corp player must install the Agendas, by laying them face down on the table. Protect them with ICE by laying ICE cards face down in front of them. And then Advance them by using clicks to add tokens to them. When the Corp has added the required amount of Advancement tokens (different for each Agenda) they score points. The Runner is trying to steal the Agendas and, even more weirdly, they don’t know if that facedown card, protected by loads of ICE even is an Agenda. It could be a trap. And when the runner spends clicks and credits to break into that server they might, instead of stealing an Agenda which gives them points, they might get brain damage, or their house might blow up. It makes for an incredibly tense game.

Then I switched my deck from Anarch to Shaper. Anarch have a lot of viruses to hand out and it all felt too fiddly when I was also trying to learn the larger arcs of the game. I switched to the Shaper faction, which appears to be about building a kickass Rig (the Runner’s Rig is the programs, hardware and resources they install on the table and is used to generate income and break ICE and do all kinds of things).

Game 3 went to me, which I won by giving myself brain damage. I played a card which gave me 9 credits, all to be used on a run, but when the run was over I had to take a point of brain damage which reduced my max grip size, which is the maximum number of cards I can have in my hand at the end of a turn.

Game 4 went to Sula due to some judicious misdirection on her part. Something I thought was an Agenda turned our to the something much uglier. And game 5 went to me. So, I’m up 3-2.

Sula picked up the Creation & Control expansion pack which, coincidentally contained a large number of new cards for both the Corporation she was playing and the Runner I was playing. So we built a new Corp deck which contains lots of offensive potential and generally looks very nasty. I haven’t done anything to my Runner deck yet so we’ll see how things turn out this weekend. I'm looking forward to playing as the Corporation, which looks like playing another game entirely.

Sula: Remember how I won that game by tricking you?

Me: Remember when I had BRAIN DAMAGE and I still beat you?

Coming up: How Netrunner is like James Joyces's Ulysses.

* Hanna is a 2011 movie about an American spy who raises his daughter (Hanna) to be every bit the spy that he is. Hanna can fight unarmed, she can shoot guns, and she speaks a dozen languages.