Sula and I are learning to play Android: Netrunner, an LCG (Living Card Game) from Fantasy Flight Games. It's a two player card game set in a dystopian future where corporations run everything from soft drink manufacture to the military. One player takes on the role of the Corporation and the other player is the Runner, a hacker trying to attack the corporation's server infrastructure. It’s all a little Matrix by way of Neuromancer, and the themes are not exactly in our sweet spot (we are loyal fans of the Game of Thrones LCG; being much more drawn to swords and sorcery than jacking in and logging off), however, we both are fascinated by Netrunner’s design and mechanics, which are asymmetrical.

In most CCGs (collectible card games) each player’s deck will be from a different faction - House Martell vs House Stark, in GoT, for example - but they both use the same mechanics. Very simply, ignoring the varied and deep tactical options in those games, they compare the stats on a card with the card from the opposing player’s deck and the results are tabulated: the larger number wins. In Netrunner, the Corporation and the Runner draw from different pools of cards, use different decks and have different actions to take as they play the game. The two decks aren’t just different thematically, as in Martell and Stark, in Netrunner there is no crossover between the card pools. Corporation cards have a blue backing and Runner decks a red. There is no mixing of the two card libraries. And as they play, the Corporation and the Runner are making different gameplay choices and using different mechanics.

There are a few ways to win:

1) The first player to score 7 agenda points, wins
2) If the Corporation ever goes to draw a card from their deck (called ‘R&D’) and they cannot draw a card, the Runner wins
3) If the Runner is ever forced to take more damage than they have cards in their hand, they die and the Corporation wins

They way each play goes about pursuing those goals is very different. 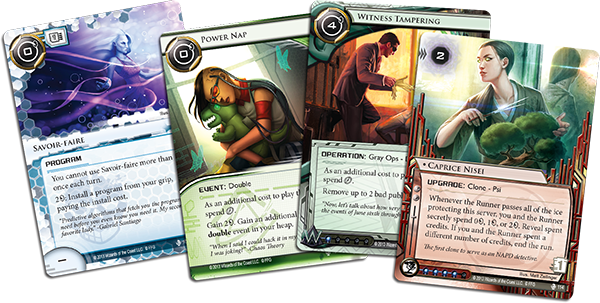 The Corporation is installing servers, by laying cards face down on the table, and protecting those servers with ‘Ice’ (powerful barriers which the Runner must break). The server could contain an Agenda card, scoring points for the Corporation if they can advance it, or for the Runner if they can steal it.  The server could also contain an Asset, a card which generates income for them, or a trap, which does damage to the Runner when they get in and access it.

The Runner is building a ‘Rig’, a suite of cards, played face up on the table, which help them break the Ice protecting the servers, or generate income for them, or install a virus on Corporation servers, syphoning credits off, or making their Ice weaker.

-Note: That’s a very rudimentary description of the game, and my best attempt at succinctly outlining the mechanics after a week of reading rules and watching games on YouTube. At this point I still have not played a single game. I’ve watched recorded games and I’ve watched live games (Jinteki.net is a browser-based platform for connecting players) and I’ve read lots and lots of forum/Reddit posts and conversations. I’m ready to play. I’m poised and primed. 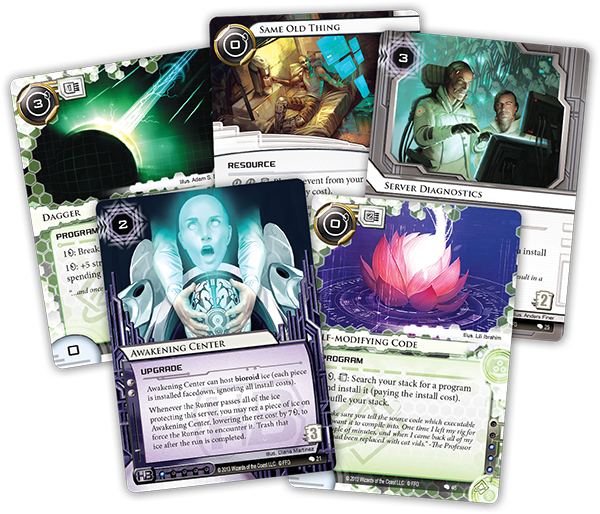 Richard Garfield, the designer of Magic: The Gathering (the 800b gorilla of CCGs) is also the designer of Netrunner, and has said he wanted to make a game that was more about player skill, and to add a bluffing component, much like poker. And this is the second reason Sula and I are drawn to this game: misdirection. The human dimension. The Corporation could have installed a valuable Agenda in that heavily guarded server, or they could be trying to draw the Runner into a trap which will end with the runner suffering brain damage, or their house blowing up. You won’t know for sure until you get into the server.