Over at Fantasy Book Critic the peerless (and tireless) Liviu Suciu has gathered the covers of his highly recommended books for 2011. 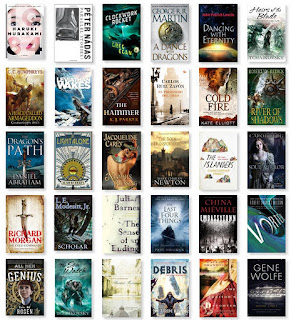 I'm surprised to see A Dance With Dragons so highly regarded (I thought it was meandering and that Martin could easily have cut two thirds of it and folded the rest into book four) but it's nice to see Richard Morgan, K.J. Parker, and Kate Elliot are all well placed.  No Steven Erikson though?  The Crippled God was February 2011; I wonder if Liviu has read it.