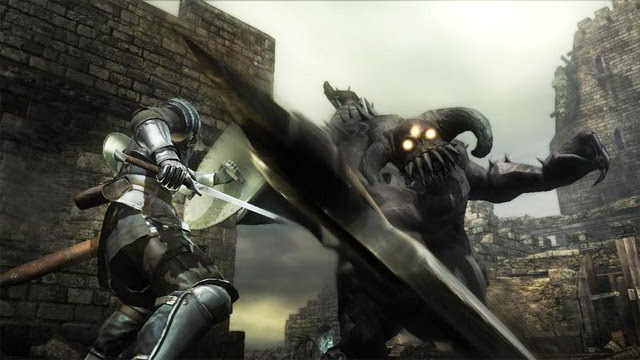 Demon's Souls is a fantasy RPG for the PS3 and one of the best games I've ever played.
Here are some of the reasons why it not only blows my skirt up, but also makes my socks roll up and down.
1) Immersion Heater:
It is perhaps the moodiest game I've played since Thief: The Dark Project.  There is no music in the levels, just the weather and the wind and the prisoners moaning and the crows feeding (I kid you not) on the bodies of things you've just killed.  There is music in the boss fights and some melancholy noodling back in The Nexus (the safe zone where the main merchants and a few dour NPCs hang out), but that's it.  The decision to leave out music, coupled with the amazing grfx and the deadly enemies make the game very real to me.  I have memories of doing things in this game as if I'd actually been there.  The art direction, the sound, the things NPCs say to you are all so consistent.  This world is so brilliantly realized.  The mood, the texture is so rich.  There's an NPC in The Nexus who is a predecessor of yours, a warrior who won't go out and fight any longer, and he just sits there getting more and more depressed as the game goes on.  Thomas the Storekeeper says to you "You have a wonderful heart.  Don't let them take it from you."
2)  Combat Tactics:
The combat system is so good that I'm probably screwing myself for all future fantasy RPGs, and expect the combat in those unimagined games to feel trite and shallow.  This is what I imagine actual melee combat to be like.  I hold up my shield (which takes stamina, and the heavier the shield is the more stamina it draws from your finite pool) and circle my opponent waiting for them to make a mistake, waiting for an opening.  If they have a two-handed weapon they can break my guard, and get through to my soft, white underbelly.  If they have a spear they can poke at me without lowering their shield.  All weapons do different attacks and different damage.  Weapons will strike walls and obstacles in the world - tables, chairs, gibbets -  messing your swing and leaving you open to counter attack.  Some weapons - daggers, katanas, lighter shields - will let me parry when wielded in my offhand.  A successful parry leaves my opponent open to a deadly counter attack doing extra damage.  Similarly, it's possible to land a backstab doing extra damage (and a gory animation) and different weapons have wider or smaller windows of opportunity for landing a successful backstab - daggers are best, but I've landed a backstab with a spear and the resultant increase in damage was a bit shocking.  I can push enemies back if I like, to give myself a moment to regroup or let my stamina replenish. I can push them off cliffs or high walls to fall to their deaths, and they me.  All swords and spears and hammers can be wielded two-handed as well as one-handed, with different results and animations.  This is the most involving, the deepest, the most satisfying sword and shield combat I've ever seen.
3)  No Cheap Shots:
This game is hard.  Enemies ambush you.  Enemies have surprising attack patterns.  Enemies will kill you repeatedly.  But it never feels cheap.  When I die, and I've died a lot, it's always, always because I screwed up.  I was too cocky or too lazy or daydreaming about Sula and I got stomped because of it.  Culdcept SAGA is more frustrating than this game.  Culdcept has made me so mad I've  thrown my controller down in anger.  I have ragequit from Culdcept.  In Demon's Souls, I never feel like my HIT is being measured against the monsters DEF and dice are being rolled backstage.  If I miss a swing, it's because I missed; I mis-timed or I mis-judged distance.  I never miss because the game decided I missed.  And when I improve my skills, my real world ability to use these tools, I overcome.  My second character advanced beyond my first in half the time, because I had mastered the combat.  When you level up your character in the game it makes their weapons hit harder but it doesn't make them hit more often.  You need to do that yourself.

4) A Brave New World:
The boxart for the Japanese version (and the U.S. Deluxe edition) is a figure in armour, slumped against a wall with arrows sticking out of their shield.  Is that figure dead?  Exhausted?  Depressed?  We have no idea.  But it's such a brave choice to put that on the cover.  It's not heroic, it's not 'bigged up', it's not triumphant.  One bright wag on GAF quipped "This game is so hard you're already dead on the box."  That is just one of the many brave choices the developers made.  This game goes against almost every design philosophy of the last decade.  Games have become guided experiences, where the player is led through the gameworld, pointed from location to location, with only the occasional choice to make, but no choices that might derail the experience, nothing dangerous.  Do you remember when, in Zork, we had to make our own maps on graph paper?  And then how Fable II left a trail of breadcrumbs for us?  Well, Demon's Souls has this list of features:
*No pause button: when you go into your inventory, or the menu, you are vulnerable anywhere but The Nexus.
*No maps.
*Souls are the games only currency, you use them to repair and buy gear and to upgrade your character and when you die you drop all the souls you've collected in a bloodstain and the monsters repopulate.  If you can fight your way back and click on your bloodstain you get the souls back, otherwise they're gone.  Oh, and when you die, you lose half your hitpoints and the monsters get stronger.  The only way to return to full hitpoints is to use a rare item found in the world, travel to another players' game and kill them, or kill a boss.
*Players can easily fall to their deaths.  There are many high things to fall off.  Players can fall on NPCs and aggro them (see next point).
*You can kill any NPC at any time.  You can kill them accidentally.  By mistake, I dropped off a platform on to the head of a merchant, she went aggro to me and I had to kill her.  She sold an item I needed which is now gone from this game cycle.  To get that item I need to finish this game and begin New Game+ which resets the gameworld with harder enemies and repopulates any NPCs that got wasted.  There's even an NPC that will kill the other NPCs, and another NPC that gives you a quest to kill NPCs, rewarding you with a rare item you can only get from doing that quest.
5)  Life, Partner:
Because the game is so hard, your life actually has value.  In most games, death is barely a setback, you respawn, dust yourself off and resume your time travel.  This game makes you care about your avatar, and the NPCs in The Nexus because, christ, we're all in it together.  It reminds me a lot of Thief.  There is an almost constant, pants-wetting tension, punctuated by moments of extreme terror.  And when you persevere, when you adapt and overcome, when you kill Flamelurker or The Tower Knight, you feel...exultant; you feel.. well, you feel the way games don't make you feel very often any more.  You feel like you improved.
6) Multi, Player
The multiplayer system is nothing short of brilliant.  As you play you sometimes see ghostly forms running about the world, fighting enemies you cannot see.  These are other players inside their own parallel games; like a doppler effect, you see them for a set period as they move past you, or you them.  Players can leave messages in the world for others to read: warnings of an upcoming battle, or a helpful clue in the environment.  Sometimes you will see a bloodstain on the ground and clicking on it allows you to see an animation of the last few moments of that player's life, perhaps warning you about an unseen enemy ahead.  Players can also enter each others gameworld as either an aid, to assist with quests, or an assassin to hunt them down and kill them.
Even the fleeting glimpses of ghostly players battling demons in their own dimensions adds to the hopelessness the game makes you feel.  And finding helpful messages on the ground can be so uplifting.  My most profound message moment: I had battled through a prison (The Prison of Hope!) and was fighting on stone walkways high above a poisonous swamp.  It is night and the blackness is suffused with a deep, repeating horn, like a foghorn but deeper and scarier, and the beating of a giant (unseen) heart.  I battled Gargoyles to get to the top of a very high, mighty, ruined tower and as I stood on the crumbled battlement I noticed a message on the ground over on the other side, away from the torchlight.  I moved over and clicked on it and it simply said "My heart is breaking."  I looked up at that view, at the towers and chains, the dim lights swinging madly in the howling wind, and I wondered where to go from there, and thought about that player who had fought all that way only to be faced with more madness.  And my heart broke a little too.
(Note that we players cannot make our own notes, we are choosing from a selection of pre-canned choices.  Which means that phrase - "My heart is breaking" - is something the developers thought we may want to say at some point in the game.  Amazing, no?)
So, all the elements of this game are designed to support the vision the devs had.  Brutal combat, incredible graphics and level design, revolutionary multiplayer features, and at its heart, a story of one person fighting and dying, over and over again.  One person fighting demons and monsters but ultimately trying to overcome their own limitations.