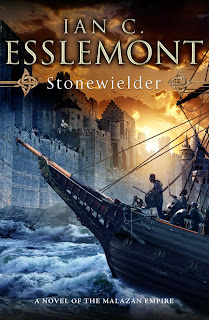 Pat's Fantasy Hotlist has posted a review of Stonewielder, the third of Ian Cameron Esslemont's Malazan novels, and the words are all good:


Although Return of the Crimson Guard was good story-wise, the novel suffered from a number of shortcomings that made it less than it should have been. I was thus curious to see if Esslemont, building on his experience and two yarns under his belt, could elevate his game and bring the house down. One of the facets that left something to be desired in Esslemont's last effort was the sometimes clunky narrative and uneven dialogue. Hence, I'm pleased to report that Ian Cameron Esslemont has obviously matured as an author. The prose's flow is now a lot more fluid than in previous installments, and his improved writing skills allow him to create a more vivid narrative. The same can be said about the dialogue, which feels a lot more genuine.

Stonewielder is due in a few weeks.