“Violence is an admission of defeat” - Bassianus Severus 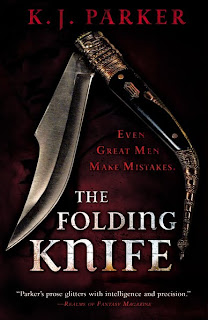 There’s a rumour that K.J. Parker, author of The Folding Knife, is really J.K. Rowling in disguise.  There’s another rumour that Parker is actually the partner of writer Tom Holt (witness this interview which people are using as evidence to support that claim).  I don’t see it myself.  I’ve never read a Harry Potter book, but based on the flavour, the waft, of that series, which I’ve absorbed via osmosis, I suppose it could be her.  In any event, for whatever reasons, Ms. Parker (who has revealed her sex) is a writer who wishes to remain anonymous.  Her barren Wikipedia page tells us, “...she has worked in law, journalism and numismatics, and now writes and makes things out of wood and metal”.  Numismatics.  Delicious.
The Folding Knife is clearly the work of either a preternaturally gifted writer, or a very experienced one.  The style is light and breezy, almost conversational.  Chapters begin with “The first thing anyone knew of it was...” and “Quite suddenly, the war was ready.”  Characters are described in quick, easy arcs, “His nose was so large that Basso wondered if he’d had it cut off someone else and sewn on special.”  (The prologue is a particular stand-out, vying with the prologue of Patrick Rothfuss’ The Name of the Wind for most compelling opening of the last few years.)  The prose is flowing and sometimes disarmingly poignant; this book can be laugh-out-loud funny, but is also very, very sad.
It’s the story of Basso The Magnificent, the First Citizen (sort of a Prime Minister, but without a Monarch to kowtow to) of the Vesani Republic.  The novel is set in a vaguely renaissance, vaguely Mediterranean Empire, where skills in banking and commerce are highly prized and it follows Basso from childhood to late-middle age.  There are three or four main characters, and a half dozen minor, but we don’t get to know anyone as well as we come to understand Basso.  The book is third person, but is told through Basso’s lens.  I’m not certain, but now that I consider it, Basso may be in almost every scene.  Although that impression could also be a consequence of Parker’s writing style.
Almost all the battle scenes in the book are relayed second-hand, from one character to another; either via letters or by telling them.  That conveys to us a great deal about the character doing the telling, which was probably Parker’s intention, but because the prose is so light, the scenes rendered with such a delicate touch, this meant that I felt distanced from the action.  I felt a bit like I was reading the book through a keyhole.  I also would have liked a bit more meat on some of the secondary characters, but since it’s really Basso’s story I can see why we are only privy to his opinions and conclusions about the people in his orbit.
I loved this book, though and I burned through it in a few days.  The Folding Knife feels very airy and superficial but that tone is deceptive and the novel left a mark on me.  The pacing is well tuned, the story contains some surprising twists, and I couldn’t help be drawn in by Basso and his obsessions.  Parker has talked a bit about the fact that she doesn’t write villains, in the usual sense, and Basso is an excellent example.  Why do people do horrible things?  Does someone lose their humanity because of the things they’ve done?  In The Folding Knife, context is all.  This book is both very funny and very tragic and highly recommended.
~
Email Post
Labels: fantasy fiction Parker