A Dance With Dragons - Update 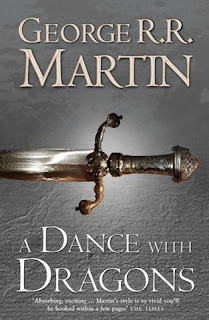 Over on his not a blog, George R.R. Martin has posted a brief update on his hotly anticipated, and long-delayed, novel A Dance With Dragons.


What's happened is, I've decided to move two completed chapters, from Arianne's POV, out of the present volume and into THE WINDS OF WINTER. This is something I've gone back and forth on. Arianne wasn't originally supposed to have any viewpoint chapters in DANCE at all, but there's this... hmmm, how vague do I want be? VERY vague, I think... there's this event that would of necessity provoke a Dornish reaction. The event was originally going to occur near the end of the book, but in one of my forty-seven restructures I moved it to the late middle instead. And the timeline then required that the Dornish reaction happen in this book and not the next one, so I wrote the two Arianne chapters and was going to write a third...

So, it looks like ADWD, Book 5 of his remarkable series A Song of Ice and Fire, is nearing completion (although no word yet on a publication date) and we have a title for Book 6: The Winds of Winter.


Although I thought Book 4, A Feast For Crows, was uneven, and focused on characters I cared less about, I am anxious for this series to continue.  Martin has a very sharp sense of place and his plotting and world building are outstanding.  Hopefully he can draw this series to a conclusion that is worthy of its lineage.